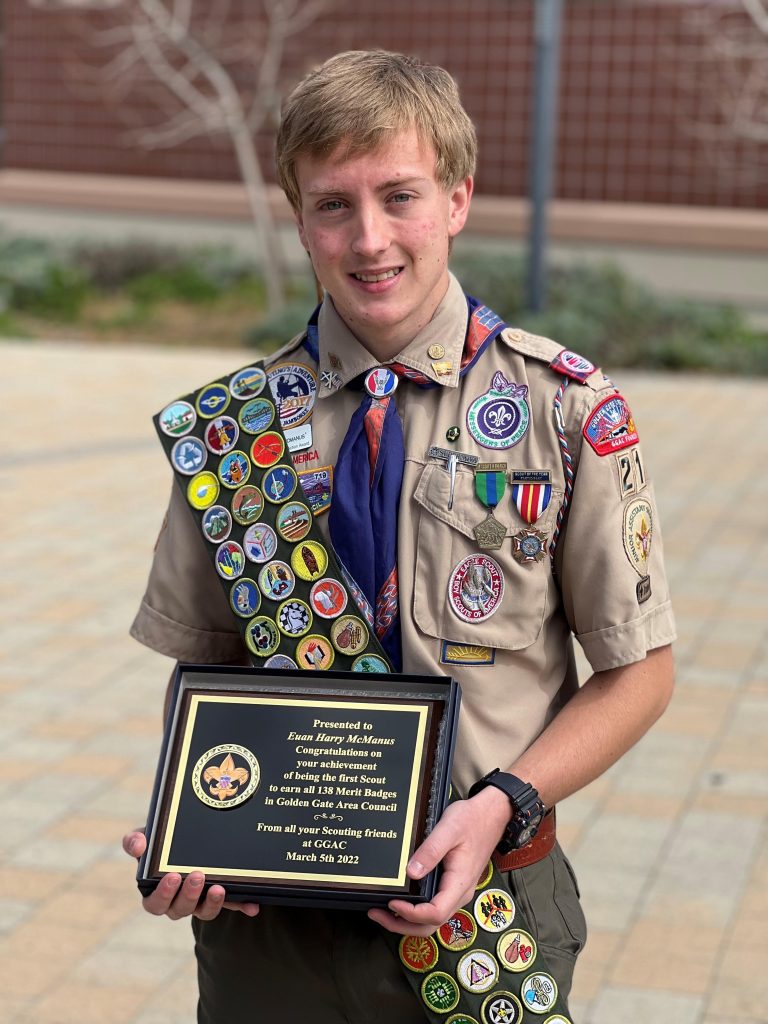 Euan, an Eagle Scout with Troop 21 in Brentwood, has just completed his 138th merit badge to join a small group of just over 520* Scouts who have earned every current merit badge offered since the founding of BSA (Boy Scouts of America) in 1910. Since that date, the organization, which now welcomes girls as well as boys into its ranks, has seen more than 130 million youth pass through its doors, with over 2.7 million of them attaining the highest rank of Eagle, which requires Scouts to earn 21 different merit badges, ranging from sports, crafts, and hobbies, through academic subjects and life skills. Based on these numbers, only 0.02% of Eagle Scouts have earned every single merit badge, with that figure dropping to 0.0004% when calculated against the total number of youth who have participated in the program.

Which all goes towards making this an especially impressive achievement, and the first time a Scout in Diablo Sunrise District (which serves Brentwood, Antioch, Pittsburgh, Bay Point, Oakley, Discovery Bay, Byron, Knightsen and Bethel Island) and the wider Golden Gate Area Council** (covering Alameda, Contra Costa, Lake, Napa, San Francisco, southern Solano, and a small portion of San Mateo) has earned this distinction. To mark this rare achievement, Euan was presented with a special plaque at the Golden Gate Area Council’s Leadership Education and Development annual training event at Diablo Valley College in Concord (also known as Scouting University) on Saturday March 5th, and at Diablo Sunrise District’s monthly Roundtable on Thursday March 10th in Brentwood, he was further presented with a leather wallet, an Eagle Scout handy multi tool, and a special edition gold plated Eagle Scout boxed pair of Cross pens from 1975, which were donated by a former Eagle Scout who wished them to be awarded to an exceptional Eagle Scout, by Golden Gate Area Council representative Tim Cannard.

Troop 21’s Scoutmaster, Michael Chiprich, has known Euan since he was a Cub Scout in Brentwood’s Pack 21 and has watched him work on badges, earn awards, and give back to the program by mentoring younger Scouts over the years. He noted: “Even at a young age in Cub Scouts, Euan was always curious and trying out new things. He took advantage of everything the program had to offer and when he moved up from Cub Scouts to the older Scouts BSA level, he didn’t forget the younger Cubs. He became a Den Chief with Pack 21 (and later with two other Packs) and led many activities for them, including a cycle ride with trash pick-up project along the Marsh Creek Trail, and many fun STEM activities, including a memorable one where he remodeled a radio-controlled truck into a planetary rover – remotely controlled and with a camera transmitting video back to a command center – which the Cubs talked about for weeks after! He has performed many leadership roles over the years and is an inspiring role model for Scouts of all ages.”

When asked which badges he enjoyed working on most, the 17-year-old Senior at Heritage High School in Brentwood had no hesitation in picking out his favorites: Scuba Diving, Whitewater (Kayaking), Hiking, Backpacking, Woodwork, Moviemaking, Welding and Robotics. Some badges took only hours or days to complete, but others took months, or even years to complete, such as Backpacking, and Bugling, which involved learning to play the bugle from scratch, although thankfully he received invaluable help from his former Band Director at Bristow Middle School, Mark Morello, who worked with him as his merit badge counselor. Some of the 138 badges were completed with local counselors, others at summer camp or special merit badge events such as on board the USS Hornet or at the Solano Fair Grounds, and some he chose to travel to special locations for, in order to get the best or most fun learning experience, such as whitewater kayaking with specialist company River Runners on the American River, learning to sail a small sailboat at Cal State Aquatic Centre, traveling to Washington D.C. while on vacation on the East Coast to stand on the very step where Martin Luther King Jr. delivered his “I have a dream” speech for the Citizenship in the Nation badge, taking a 16-hour Blacksmithing course at the Crucible in Oakland for the Metalworking merit badge and traveling to the International Printing Museum in Los Angeles to learn how to screen-print a T-shirt, run an offset press, grind pulp, make a sheet of paper, and letterpress print a card on an antique press, while earning the Pulp and Paper and Graphic Arts merit badges.

Euan’s answer as to what motivated him to spend so much time and energy on earning all these merit badges was simple: “I just love learning and experiencing new things. The merit badges have increased my knowledge in a huge range of different subjects – some of which I knew nothing about before starting work on the badge – as well as teaching me a variety of new outdoor, technical and life skills which I am sure will stand me in good stead throughout my whole life. I am hoping to study Mechanical Engineering at College in the Fall and several of the merit badges were STEM-related, so really helped me with some of my high school classes. But it’s not just about learning. There’s a ton of fun and challenges along the way too, and I discovered a brand-new, favorite hobby in Scuba Diving, thanks to trying it out for the merit badge, and am now working my way towards Master Diver. I can’t thank enough all the merit badge counselors who helped and guided me towards this achievement. I couldn’t have done it without them, and I am grateful for all the time they spent with me and the encouragement they gave me.”

Along the way, while earning all these badges, Euan has clocked up 164 camping nights, 348 hiking miles and over 560 service hours to the wider community and Scouting groups. In addition to being an Eagle Scout, he is also a Vigil Honor member of the Order of the Arrow, which is the highest rank achievable in BSA’s Honor Society, earned the Adams Eagle Scout Service Project of the Year in 2019 for organizing a STEM family night at Marsh Creek Elementary School in Brentwood (his former elementary school), received the VFW (Veterans of Foreign Wars) Scout of the Year award at local and district levels in 2020, earned the National Medal for Outdoor Achievement in 2019 and the Dr. Bernard Harris and Thomas Edison National STEM Supernova Award Medals in 2017, in addition to many other awards.

* Source: Merit Badge Knot.com: a site which independently tracks Scouts who have earned every merit badge available; not part of BSA.