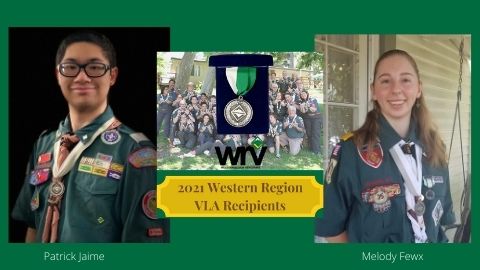 Congratulations to Patrick Jaime and Melody Fewx on being awarded the Western Region Venturing Leadership Award for 2021!

The Venturing Leadership Award (VLA) honors Venturers and Venturing Advisors who have made exceptional contributions to Venturing and who exemplify the Scout Oath and Scout Law. The VLA may be awarded in the Council. Area, Region, and National levels. The Western Region covers all of Alaska, Arizona, California, Colorado, Hawaii, Idaho, Nevada, New Mexico, Oregon, Utah, Washington, Wyoming, and parts of Montana, Nebraska, South Dakota, and Texas as well as the countries of Japan, the Philippines, South Korea, Taiwan, and Thailand.

On April 9, 2021 during the Western Region Venturing Officers’ Association (WRVOA) Open House via Zoom, 8 Venturers and Advisors were officially awarded the 2021 Western Region Venturing Leadership Award; among those were Patrick Jaime and Melody Fewx from the Golden Gate Area Council. To date, Patrick and Melody have been awarded 3 of the 4 VLAs (were awarded Council, Area, and Region) and have served 4-5 years in Venturing leadership positions. This is the final year these VLAs will be awarded to the Area and Region level due to the incoming transition to the Territory structure in the BSA.

Patrick served as the 2019-20 WRVOA Vice President of Communications and he was responsible for keeping the Venturers in the Region Informed in terms of planned events, trainings, policy updates, Journey to Excellence for Council Venturing (JTECV), VOA applications, and VLA nominations.  He led the Western Region Venturing Communications Task Force Team and engaged the Venturers in the Region through social media content and managing newsletter publications.  Patrick is an Eagle Scout with 120 merit badges and 19 Eagle Palms (when he was still a youth), a recipient of the Venturing Summit Rank, Venturing Quest Award, Venturing Trust Award, Messengers of Peace Award, and World Conservation Award. He is also an Order of the Arrow Vigil Honor Member of the Legacy Ut-In Sélica Lodge (now Yerba Buena Lodge) and has served as a Lodge Officer.

Melody served as the 2020-21 WRVOA Vice President of Administration and she was responsible for promoting/acquiring JTECV forms, updating contact rosters of Council VOAs in the Western Region, and collect pertinent data for Leadership Evaluation and Area Development (LEAD) with the 5 Area VOAs.  She also led the Western Region Venturing Administration Task Force Team who helped her carry out her tasks as she delegated them to do so.  Melody is an Eagle Scout (member of the Inaugural Class of Female Eagle Scouts), a recipient of the Venturing Summit Rank, and Venturing Quest Award. She is also an Order of the Arrow Brotherhood Honor Member whilst in the Legacy Achewon Nimat Lodge (now Yerba Buena Lodge) and has served as a Lodge Officer.

The Region VLA is denoted by a green and white colored ribbon with a circular medal that has the Venturing diamond logo affixed at the center.  Due to the COVID-19 pandemic and local health restrictions, the medals are being mailed to the recipients rather than them receive it in-person.