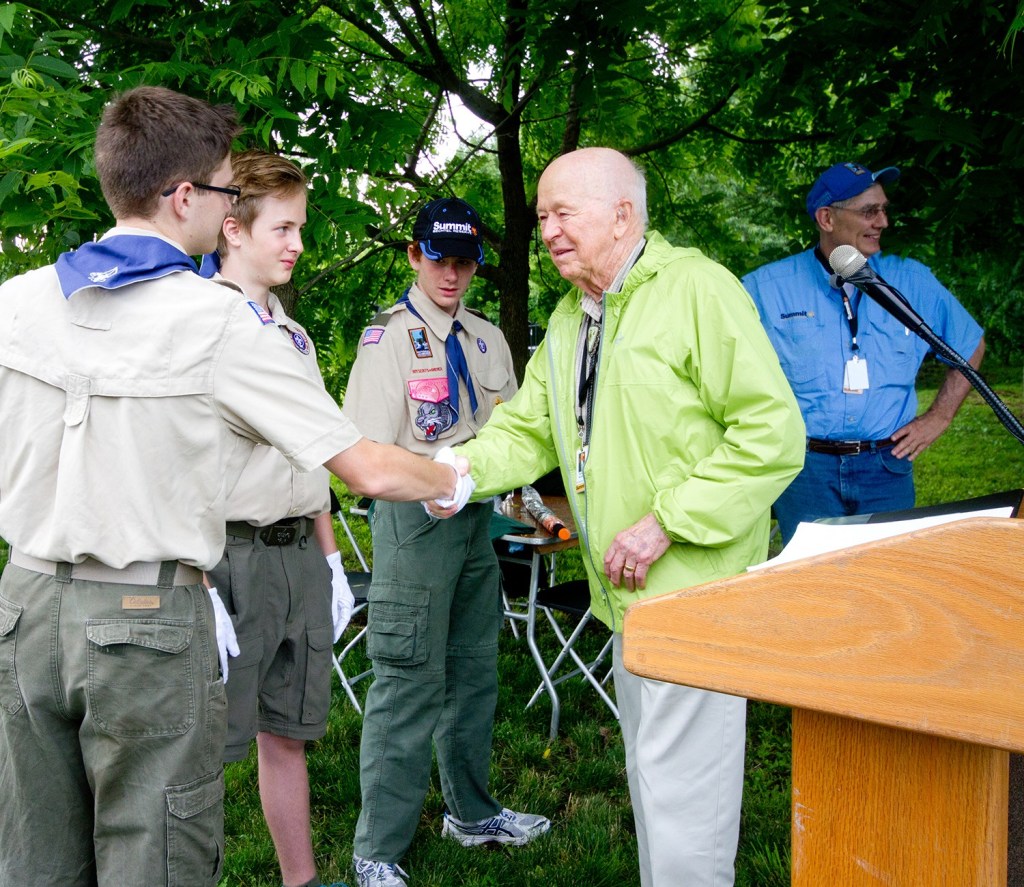 Distinguished Eagle Scout and Silver Buffalo recipient Stephen D. Bechtel, Jr. died peacefully at home on March 15, 2021. He was 95. His company remains a powerhouse in the corporate world while he was known for his business acumen and engineering skills. Many of his ideas changed the face of the world. Mr. Bechtel was the greatest individual donor in the history of the Boy Scouts of America. His individual contributions to Bay Area Scouting and facilitated gifts from friends and family exceeded tens of millions of dollars. His charity and support are immeasurable; his legacy lives on nationally from his primary sponsorship of the Bechtel Summit Reserve, the BSA’s cutting edge high adventure facility in Glen Jean, West Virginia.

Stephen became an Eagle Scout in 1940 as a member of Troop 4 in the Piedmont Council and served as a camp staff member at Camp Wallace Alexander. “The experiences and lessons of Scouting have been very beneficial to me over the years,” Bechtel said in Steady at the Helm – Lessons in Leadership From Stephen D. Bechtel Jr., published by the BSA in 2016. “Even as a young boy I could see that Scouting encouraged personal values that were important to success in life,” he said. “In fact, over time the values highlighted in the Scout Oath and Law helped to frame and validate my worldview.”

Although Bechtel had a proud history of megaprojects in the United States, Steve Jr. extended the firm’s footprint around the world and took on efforts of increasing technical sophistication. Among Bechtel’s notable projects under his leadership were: the Bay Area Rapid Transit system (BART) of San Francisco; many first-of-a-kind North Sea oil and gas platforms; LNG plants in Algeria, the UAE, and Indonesia; nuclear power plants throughout the U.S.; the Jubail Industrial City and King Khalid International Airport in Saudi Arabia; and the Channel Tunnel between Britain and France.

Mr. Bechtel was the first honoree of the Construction Lunch-O-Ree, the first chair of the Distinguished Citizen Dinner, and funded countless capital projects in our council.  His funding priorities were focused on education, at risk Scouts, and camp improvements. Stephen supported multiple local councils, including his home Piedmont Council for many years.

In Golden Gate Area Council (GGAC), he started the Scoutreach program. His goal was to ensure that at risk youth would be able to learn Scouting’s values and experience its’ character building. More importantly, he wanted those youth to enjoy the experience of summer camp. Mr. Bechtel funded the Learning for Life (LFL) program for many years. His philanthropy enabled the development of the “Engineering is Fundamental” program offered initially through the Boston Museum of Science, which became the basis for a LFL after school elementary engineering program.

Stephen’s charity allowed for countless capital improvements to GGAC facilities. A major individual grant in 2009 funded 10 camp projects, including the Wente Administration Building and Royaneh Ranger’s Residence. Other projects include the Royaneh Pool renovation and a water and septic system upgrade at Rancho Los Mochos.

“Scouting made a tremendous impact on my life,” Bechtel said. “It’s the source of some of my fondest memories.” Thanks to Stephen’s generosity, the Golden Gate Area Council and local Scouting will be impacted similarly for years to come.